I’m not the kind of blogger who quick-posts; I can’t quick-fire ramblings out into the ether in minutes. I struggle with my time management frequently and often find it quite impossible to write an entry under one thousand words. In fact, the majority of my posts average in the thousands. I’m not sure exactly why this is, all I know is my gut says I’m a verbose perfectionist who doesn’t know when to shut her gob.

As such, I feel like I’m missing out on some quality, interesting discussion. In attempt to remedy this trend I’ve decided to emulate a tried and tested segment of a regular weekly round-up of news, throw out a couple of links and shout-out to a few bloggers who piqued my curiosity with wonderful posts and articles in any given week.

This Week In Geek

STAR WARS: EPISODE VII TO OPEN DECEMBER 18, 2015 – This week the official announcement of the next Star Wars installment gave us an official release date of Christmas 2015. Rumoured to have been concerned over summer blockbuster clashing, Disney has opted for a holiday opening. Normally the timing would worry me, but I’ve no doubt that the still unnamed Episode VII will blow all of the other seasonal silliness at the cinema completely out of the water. Filming is scheduled to begin in Spring of next year.

MARVLIX – In an unprecedented (and slightly historic) move, Disney’s Marvel and Netflix announce their intention to unite their powers and join forces to bring us multiple series of live-action adventures based on Daredevil, Jessica Jones, Iron Fist and Luke Cage. In the most exciting team-up news since Superman vs Batman (which wasn’t all that exciting), this fangirl rejoiced as she pondered the future of Internet television and the many potential hours of life lost wrapped up in some Super stories.

THE BATTLE OF THE BULGE – As two heavy-weights of next-gen prepare to enter the ring and engage in a feud of deathmatch proportions, excited gamers everywhere wait impatiently for their chosen console. JohnHeatz reports this weekend on the extra goodies Sony is gifting PS4 advocates in the US and Canada, and for those still undecided a series of articles entitled Xbox One Vs. PS4 from 8BitChimp may just help you make up your mind.

And finally, GRAVITY opens up here in Ireland this weekend, granting me an opportunity to finally see what everyone else has been banging on about. All I need now is someone to come and see it with me!

In more personal news, this week I accepted Liebster and Versatile Blogger awards from some wonderful people and indulged myself in a rant about Awkward‘s divisive viewership.

Over at 1001-Up I’ve been reading about Kim’s and the team’s illuminating foray into the understanding of the Bronyism psychology and what attracts Bronies to Friendship is Magic and the online community. Rhio of The Adventures of a Girl Gamer writes about GTA V online and suggests a few fun ways that we can spend our in-game spondoolies. Drakulus continues to amaze with some epic Guild Wars 2 screenies and The Otaku Judge takes on Pokemon X.

I’ve been watching Arrow and The Walking Dead, both of which are still keeping me very much entertained, and managed to catch up on Agents of S.H.I.E.L.D. I’m pleasantly surprised by the latter’s progress. I managed to watch the first Dracula episode last night before I began to doze off, but there’s enough content in the opener to convince me to keep watching for now. For a concise breakdown of the new series thus far, check out The Mental Attic’s review.

In the hopes of doing another “V Does DVDs” segment for the October releases I’ve consumed three of my thirteen possible entrants. Thirteen!? I don’t know what I was doing six months ago when all of these films were in theaters, but it was obviously very time consuming. It was probably drink related.

Having read a review of The Way, Way Back from Table 9 Mutant over at Cinema Parrot Disco, I decided that despite this particular film not being as appealing to me as my usual fare of blood, guts and glory, I really needed to start stepping outside of my movie comfort zone and give these soppy dramas a chance. I’m glad I did, and I’ll hopefully have a review of it up soon, along with the other twelve. I’m giving some serious thought to ringing in sick next week.

Have you anything to add? Tell me your news below!

During my work days I do many things to keep myself occupied. Scrabble, crosswords, Temple Run… and even the dreaded and feared Candy Crush from time to time. Recently I installed the Hanging With Friends app, which is basically just a fancy looking cartoonified version of hangman. The other day I started a game with a random online opponent. It took me a few rounds before I realised he was playing an entirely different game to me. 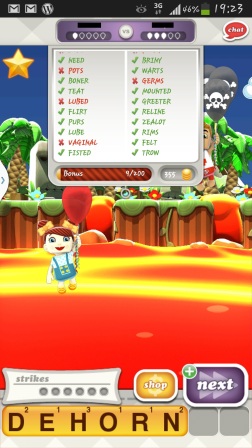 My opponent’s “words” on the left.

This game went on for hours and I was giggling like a schoolgirl throughout, so much so that I’ve now decided that rude hangman is the only way to play hangman. Now if you’ll excuse me, I’m going to waste my Sunday by getting back into bed and vegetating with some tea and my Brussels while I play SWTOR on my laptop and pretend to be a Jedi.